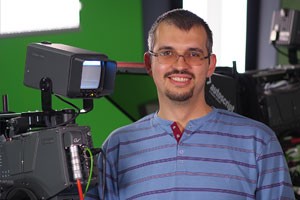 In 2007, the strategic development of the production of the company had decided to move to tapeless technology in film-making equipment, and the installation of programs and news. As well as the orientation to start and develop ouer own channel of satellite broadcasting.
In this regard, resources were allocated for the design of the technical center, which consists of the design and launch of control-studio block with the ability to work with virtual scenery, as well as automated production system and issuing news running newsroom Octopus. As a system integrator chose the company Comtel, due to which has been developed and brought to life this project. The technical center is based on the language Grass Valley K2 server with 100% redundancy, through which all the processes of digitization playout and record programs, as well as file transfer carried with mounting systems to an ftp server. The control Grass Valley Kayak DD2 has been selected as a hand-held mixer.
The highlight of the project was the installation of a virtual company VizRT studio, allowing reduced installation costs and a change of scenery in the software production process, as well as an opportunity to change the scenery in short time. Creative staff of the company has received a powerful tool to implement their boldest ideas in real time, without mistakes.

CGTN has rolled out a very unique mobile broadcast studio for coverage of the 2022 ... Read More
View Comments